THE MUSEUM AND THE CRAFTSMEN: CHINA THROUGH THE EYES OF MARTIN TINCHEV – THE YOUNGEST CRAFTSMAN IN THE “ETAR” MUSEUM

For 55 years both the “Etar” Museum and the craftsmen who work there have been keeping Bulgarian tangible and intangible cultural heritage together. In the first years after 1989, a change was made – some of the full-time occupied craftsmen became tenants of their workshops. Others remain on the payroll of the museum, which performs its role of preserving crafts at the risk of extinction, whose production is not attractive to widespread consumption. The “Etar” Museum, as an institution with wide international contacts, strives to provide opportunities for its craftsmen to present their products and to demonstrate crafts outside the borders of Bulgaria. Over the last five years, “Etar” craftsmen have been presented in Romania, France, Portugal, Poland, Ireland, China. In order to fulfill its role in the preservation and presentation of Bulgarian crafts, the museum manages to increase the number of visitors. Over 200,000 people pass through the “Etar” per year, and in 2019 it is expected a record to be set for the past decade.

Almost 30 years old, Martin Tinchev is the youngest craftsman at the “Etar” Museum. Most recently, he takes the craft into his own hands by participating in a contest for the Gold- and Silversmith Workshop and manages to win, even though he is a competition of an old and famous craftsman who is his father.

For the craftsman Tincho who handed over the craft to his son is most natural to feel satisfaction that his own son proves more worthy to continue to practice in the workshop, whose monthly rent, set by the Gabrovo Municipal Council, is BGN 192 with VAT. The amount has been reduced from the previous period, which is an additional incentive for the young man to develop the craft.

The director of the “Etar” Museum, Prof. Dr. Svetla Dimitrova, not for a moment hesitates to introduce Martin Tinchev to the Chinese cultural attaché and to recommend him heartily for participation in common initiatives. This happens during a visit of the diplomat in Gabrovo.

The results are not delayed. In 2019, the craftsmen Martin Tinchev and Kaloyan Minchev – the son of the woodcarver at the “Etar” Museum Tsvetomir Minchev, travel to China, where different countries display their national cultural heritage. Prof. Dr. Svetla Dimitrova arranges travel and accommodation cost to be for the host country expense. For a week the craftsman presented in a worthy way the traditions of Bulgarian gold- and silversmithing. Good sales and no cost are an excellent stimuli for an ambitious young man who has decided to continue his family tradition. And also one day he to become even more famous than his father.

The invitation comes from the UNESCO Creative Cities Network, part of which is Gabrovo, thanks to the “Etar” Museum.

Martin Tinchev described the organization of the event as very good. He presents himself with products made with the filigree technique, in which all is hand-made with a very high silver sample. In this technique things are into the mind of the craftsman, so anything can be created as long as one has the talent.

“I learned the craft from my father Tincho. He has been involved in silversmithing for 50 years and is one of the oldest craftsmen. Nowadays, the technologies which he learns from as a young craftsman are not used, although they are interesting,” says Martin Tinchev.

The filigree is a well-known technique in China, and Martin enhances his professional capacity with his contacts there.

“I was able to see and learn a lot of things which I will use in future. When you have basic knowledge, it is easier to navigate and get something in the craft. It is like an enriching experience. Craft is like life – you are constantly evolving, you cannot know everything. In China, they have streets where they can demonstrate what they create. Everyone can see how from a piece of metal a beautiful masterpiece is made.”

A deep, rich and strong culture that is open to the world – this is how China looks through the eyes of the youngest craftsman at the “Etar” Museum, Martin Tinchev. He hopes he have made a good impression for his home country, Bulgaria, which also has a long history in craftsmanship.

Martin Tinchev says he would like to show his skills in lot of other places in the world, though he admits that he still has little experience. He gives due respect to the work of other craftsmen with many years of practice and believes that over time he will build on his own achievements.

The youngest craftsman Martin Tinchev believes that the other masters in the “Etar” Museum are his family. He is ready to continue the tradition – to listen to what the more experienced ones tell him.

“That’s the case with craftsmen. This is how it should be and this is what is right. We need to help each other as a family,” Martin Tinchev thinks. 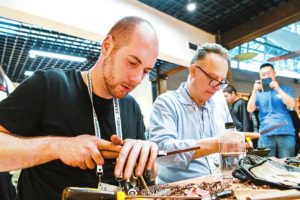 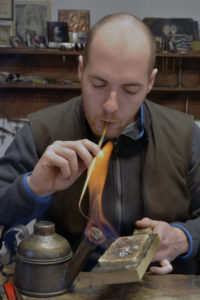 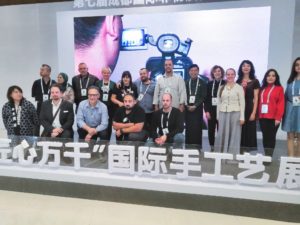