Since the very beginning of the crisis, provoked by the COVID-19 pandemic, the cultural and tourist sectors in Bulgaria-one of the Member States of the European Union have been among the most affected by the imposed limitations and it is difficult for them to carry out their activity. Culture has been defined by the national and local authorities as one of the priority areas that need an urgent programme for support. This engagement has been directed also towards the masters of traditional crafts in the museums and ethnographical complexes in Bulgaria.

Especially difficult were the months March, April and May of 2020 when the museums were closed and there was a real danger in front of the craftsmen connected with them to give up practicing their crafts and their skills – intangible cultural heritage to disappear.

In this situation the State Authority suggested variants for protection of the cultural sector.

Some of the undertaken measures were general towards the whole labour market (such as tax incentives, subsidization of employment and benefits for unemployed persons) and others were specific, directed only at persons with proven experience in the field of culture and arts or keepers of traditional crafts.

Several municipalities in Bulgaria(local institutions with functions of legislative and executive power), on which territory there are open-air museums and ethnographical complexes of national importance, appealed to the Ministry of Culture for assistance and support for these masters of traditional crafts in serious financial difficulties, many of whom are owners of small family firms.

As a result of these efforts for support of the crafts, the project “Craftsmanship for the Future” is carried out with estimated cost of 85 000 Bulgarian levs (around USD 48 771, 25).  The purpose of the project is to promote the skills of the masters in the workmanship of traditional and design articles. The project is carried out at the Regional ethnographic open-air museum “Etar”, situated in the central part of Bulgaria and financed by the Ministry of Culture.

This museum is among the most popular cultural and tourist sites. Before the COVID-19 pandemic it was visited by more than 200 000 persons. Between 18 and 22 active craftsmen’s workshops and facilities are presented at “Etar” museum depending on the season. The project has been realized by the museum team; beneficent is the Municipality of Gabrovo – the institution that presents the local executive power and the financing authority is the State through the budget of the Ministry of Culture of Bulgaria. The sum is allocated to the masters at “Etar” museum who invest it to buy materials, to present skills, to pay the work of a documenting team and their own labour costs and office materials.  Each of the craftsmen, included in the project, receives around 5 000 Bulgarian levs – according to the conditions in Bulgaria, this sum is sufficient to pay for the functioning of the workshops and the allowance of the masters for a period of 2 – 3 months and is equal to USD 2 877,76. In 2021, the year when the project is carried out, the minimal salary in Bulgaria is 650 Bulgarian levs (around USD 374, 11).

The project “Craftsmanship for the Future” aims to support financially in documenting, preserving and promoting of artisans’ skills of the masters at “Etar” museum. Each of the craftsmen in the project makes one traditional and one design article. The whole process is documented by video.

The masters have the engagement to make a traditional and a design articles. The process of making of the traditional article is documented in all stages and becomes part of the film. 17 short films and a trailer are made for the general public.

The making of video products has a purpose for a long term to promote the articles of the masters.

The museum team plan to present the films at the tourist markets, conferences, craftsmen’s fairs, in the Creative Cities Network of UNESCO and in the Creative Tourism Network, where the town of Gabrovo is a member. The made articles and the documented technologies will be shown at the exhibition at the Regional ethnographic open – air museum “Etar”. In 2022 they will be presented in other museums and cultural institutions in Bulgaria.

The project “Craftsmanship for the Future” is presented as a good practice for preservation of the cultural – historical heritage during the 4th interregional seminar (18th-19th of November, 2021) of the International project “Code Crafts”.

At the same time the director of “Etar” museum prof. Svetla Dimitrova, PhD and the head of the “Cultural Management” department Svetlozar Todorov present the project at the meeting of the Management Board of ICOM for South East Europe.

“Craftsmanship for the Future” is an initiative that by direct financing gives an opportunity to masters – bearers of skills, which are intangible cultural heritage, to continue practicing their crafts. These skills are documented and preserved for the future. By video productions the interest of the new generation towards the craftsmanship is provoked and a chance is given for acquiring knowledge, connected with a definite craft to some level.

By this project the central and local authorities in Bulgaria and the museum specialists from “Etar” museum contribute to the preservation of the precious masters’ skills of the artisans, working in the museum. This project is good measure against the COVID -19 consequences and can be applied successfully in different situations as it is adapted depending on the subjective factors. 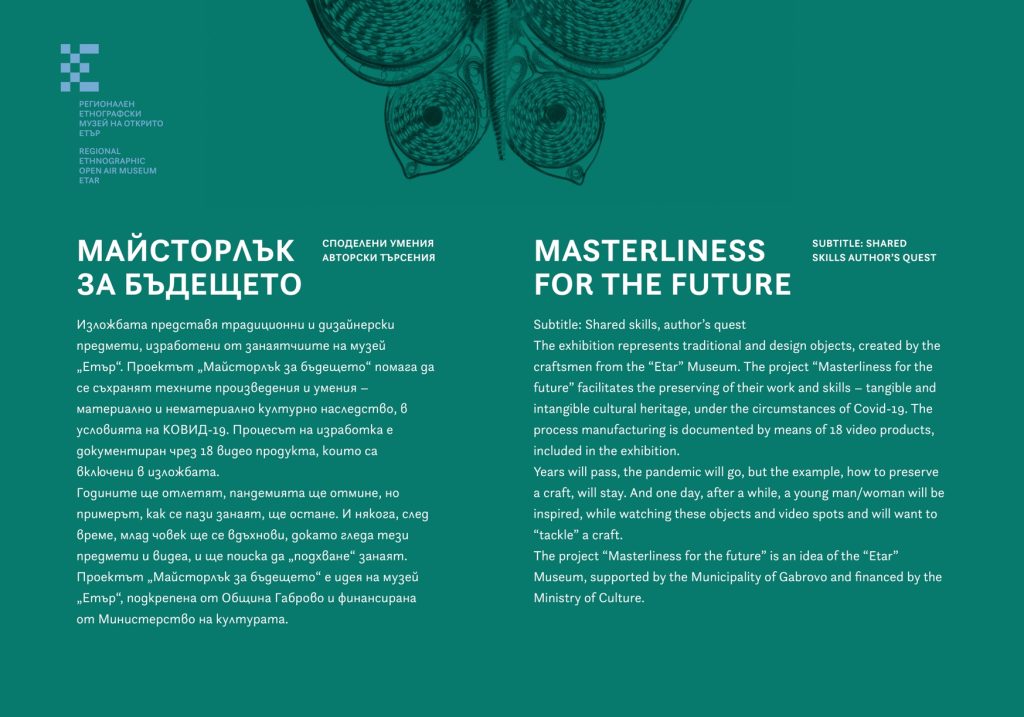